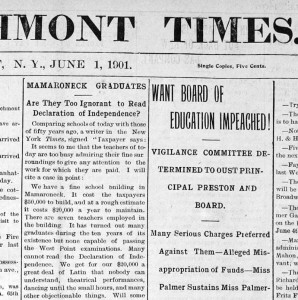 The Larchmont Times of 1901 and 1902 are editions of a weekly newspaper published by George S. Forbes. The paper was produced in New Rochelle from offices at 225 Huguenot Avenue. It became the Larchmonter Times in 1908 and was published until 1922. It was then succeeded by the Larchmont Times, which ran until 1955.

The Historical Society obtained an original set of the 1901-1902 Larchmont Times in 2008, digitized it, and then posted it to the Photo Archives. We also scanned and cropped separately a set of advertisements by local merchants and professionals.

Readers Tip: you can click on an image to reach a larger version with print that is easier to read.

There are many interesting articles in 1901 and 1902, including the following:

These major stories are accompanied by advertisements, newsy tidbits about the lives of local residents, stories of parties and celebrations, and summaries of the deliberations of the governing boards.