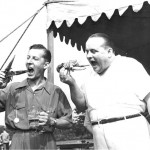 Two residents celebrated at Flint Park during the 1940s

Herb Roth was a local resident and well-known cartoonist. He worked for the New York World and the New York Herald Tribune, but also published his cartoons and illustrations independently. The Larchmont Public Library has a collection of his photographs of Larchmont in the early 1940s.